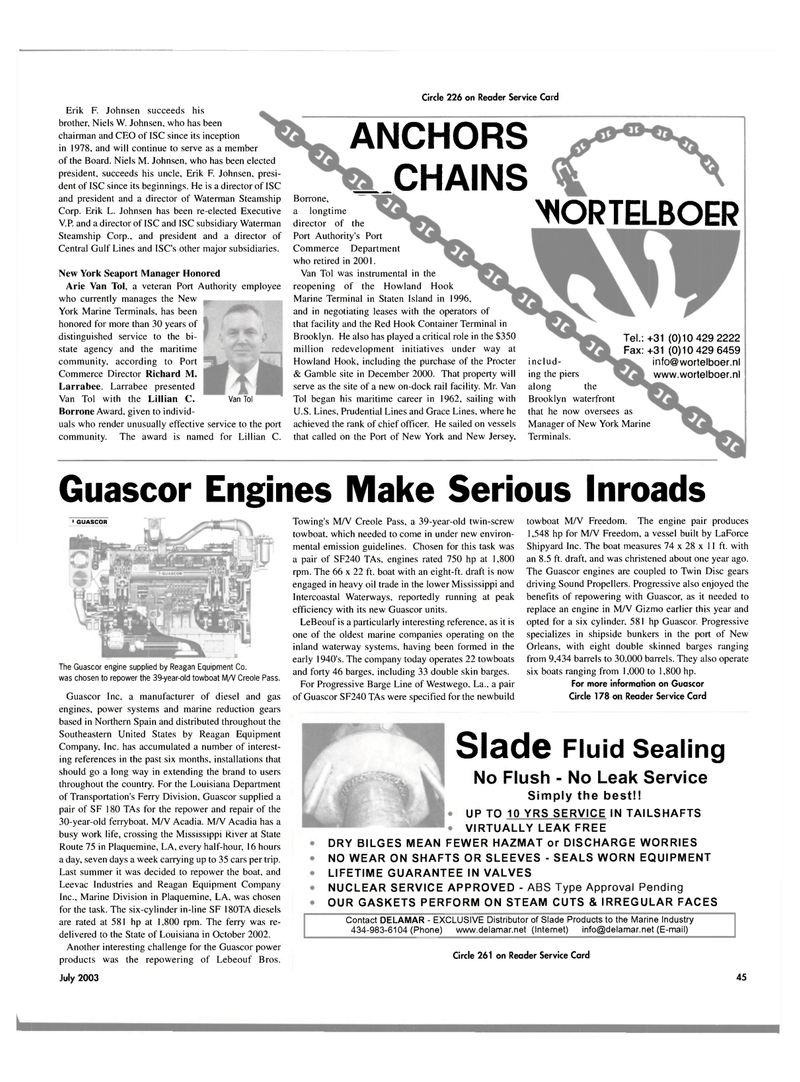 Erik F. Johnsen succeeds his brother, Niels W. Johnsen, who has been chairman and CEO of ISC since its inception in 1978, and will continue to serve as a member of the Board. Niels M. Johnsen, who has been elected president, succeeds his uncle, Erik F. Johnsen, presi- dent of ISC since its beginnings. He is a director of ISC and president and a director of Waterman Steamship

V.P. and a director of ISC and ISC subsidiary Waterman

Steamship Corp., and president and a director of

York Marine Terminals, has been honored for more than 30 years of distinguished service to the bi- state agency and the maritime community, according to Port

Van Tol with the Lillian C.

Borrone Award, given to individ- uals who render unusually effective service to the port community. The award is named for Lillian C.

Borrone, a longtime director of the

Commerce Department who retired in 2001.

Van Tol was instrumental in the reopening of the Howland Hook

Marine Terminal in Staten Island in 1996, and in negotiating leases with the operators of that facility and the Red Hook Container Terminal in

Brooklyn. He also has played a critical role in the $350 million redevelopment initiatives under way at

Howland Hook, including the purchase of the Procter & Gamble site in December 2000. That property will serve as the site of a new on-dock rail facility. Mr. Van

Tol began his maritime career in 1962, sailing with

U.S. Lines, Prudential Lines and Grace Lines, where he achieved the rank of chief officer. He sailed on vessels that called on the Port of New York and New Jersey, ^NORTELBOER includ- ing the piers along the

Brooklyn waterfront that he now oversees as

Guascor Inc, a manufacturer of diesel and gas engines, power systems and marine reduction gears based in Northern Spain and distributed throughout the

Company, Inc. has accumulated a number of interest- ing references in the past six months, installations that should go a long way in extending the brand to users throughout the country. For the Louisiana Department of Transportation's Ferry Division, Guascor supplied a pair of SF 180 TAs for the repower and repair of the 30-year-old ferryboat, M/V Acadia. M/V Acadia has a busy work life, crossing the Mississippi River at State

Route 75 in Plaquemine, LA, every half-hour, 16 hours a day, seven days a week carrying up to 35 cars per trip.

Last summer it was decided to repower the boat, and

Inc., Marine Division in Plaquemine, LA, was chosen for the task. The six-cylinder in-line SF 180TA diesels are rated at 581 hp at 1,800 rpm. The ferry was re- delivered to the State of Louisiana in October 2002.

Another interesting challenge for the Guascor power products was the repowering of Lebeouf Bros.

Towing's M/V Creole Pass, a 39-year-old twin-screw towboat, which needed to come in under new environ- mental emission guidelines. Chosen for this task was a pair of SF240 TAs, engines rated 750 hp at 1,800 rpm. The 66 x 22 ft. boat with an eight-ft. draft is now engaged in heavy oil trade in the lower Mississippi and

LeBeouf is a particularly interesting reference, as it is one of the oldest marine companies operating on the inland waterway systems, having been formed in the early 1940's. The company today operates 22 towboats and forty 46 barges, including 33 double skin barges.

For Progressive Barge Line of Westwego. La., a pair of Guascor SF240 TAs were specified for the newbuild towboat M/V Freedom. The engine pair produces 1,548 hp for M/V Freedom, a vessel built by LaForce

The Guascor engines are coupled to Twin Disc gears driving Sound Propellers. Progressive also enjoyed the benefits of repowering with Guascor, as it needed to replace an engine in M/V Gizmo earlier this year and opted for a six cylinder, 581 hp Guascor. Progressive specializes in shipside bunkers in the port of New

For more information on Guascor

No Flush - No Leak Service

UP TO 10 YRS SERVICE IN TAILSHAFTS

NO WEAR ON SHAFTS OR SLEEVES - SEALS WORN EQUIPMENT