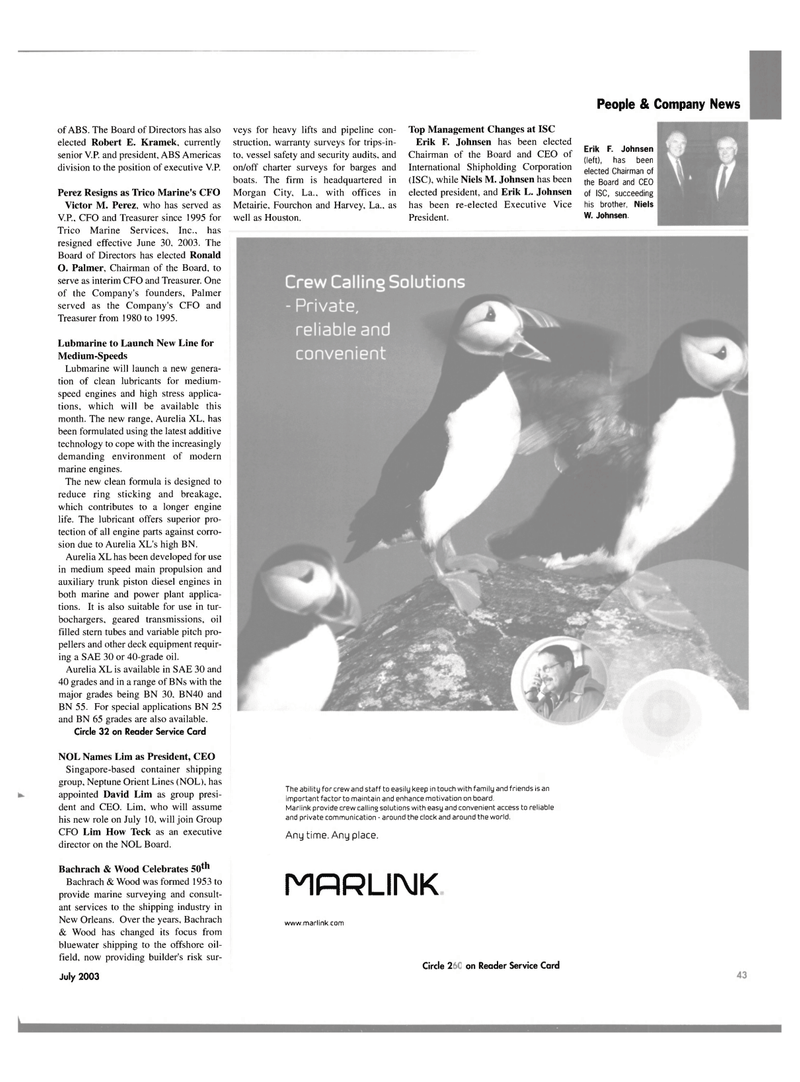 Lubmarine to Launch New Line for

Lubmarine will launch a new genera- tion of clean lubricants for medium- speed engines and high stress applica- tions, which will be available this month. The new range, Aurelia XL, has been formulated using the latest additive technology to cope with the increasingly demanding environment of modern marine engines.

The new clean formula is designed to reduce ring sticking and breakage, which contributes to a longer engine life. The lubricant offers superior pro- tection of all engine parts against corro- sion due to Aurelia XL's high BN.

Aurelia XL has been developed for use in medium speed main propulsion and auxiliary trunk piston diesel engines in both marine and power plant applica- tions. It is also suitable for use in tur- bochargers, geared transmissions, oil filled stern tubes and variable pitch pro- pellers and other deck equipment requir- ing a SAE 30 or 40-grade oil.

Aurelia XL is available in SAE 30 and 40 grades and in a range of BNs with the major grades being BN 30. BN40 and

CFO Lim How Teck as an executive director on the NOL Board.

The ability for crew and staff to easily keep in touch with family and friends is an important factor to maintain and enhance motivation on board.

Marlink provide crew calling solutions with easy and convenient access to reliable and private communication - around the clock and around the world.

Any time. Any place. of ABS. The Board of Directors has also elected Robert E. Kramek, currently senior V.P. and president, ABS Americas division to the position of executive V.P.

Victor M. Perez, who has served as

Board of Directors has elected Ronald

O. Palmer, Chairman of the Board, to serve as interim CFO and Treasurer. One of the Company's founders, Palmer served as the Company's CFO and

Treasurer from 1980 to 1995. veys for heavy lifts and pipeline con- struction, warranty surveys for trips-in- to, vessel safety and security audits, and on/off charter surveys for barges and boats. The firm is headquartered in

Morgan City, La., with offices in

Metairie, Fourchon and Harvey, La., as well as Houston.

Erik F. Johnsen has been elected

Chairman of the Board and CEO of

Erik F. Johnsen (left), has been elected Chairman of the Board and CEO of ISC, succeeding his brother, Niels