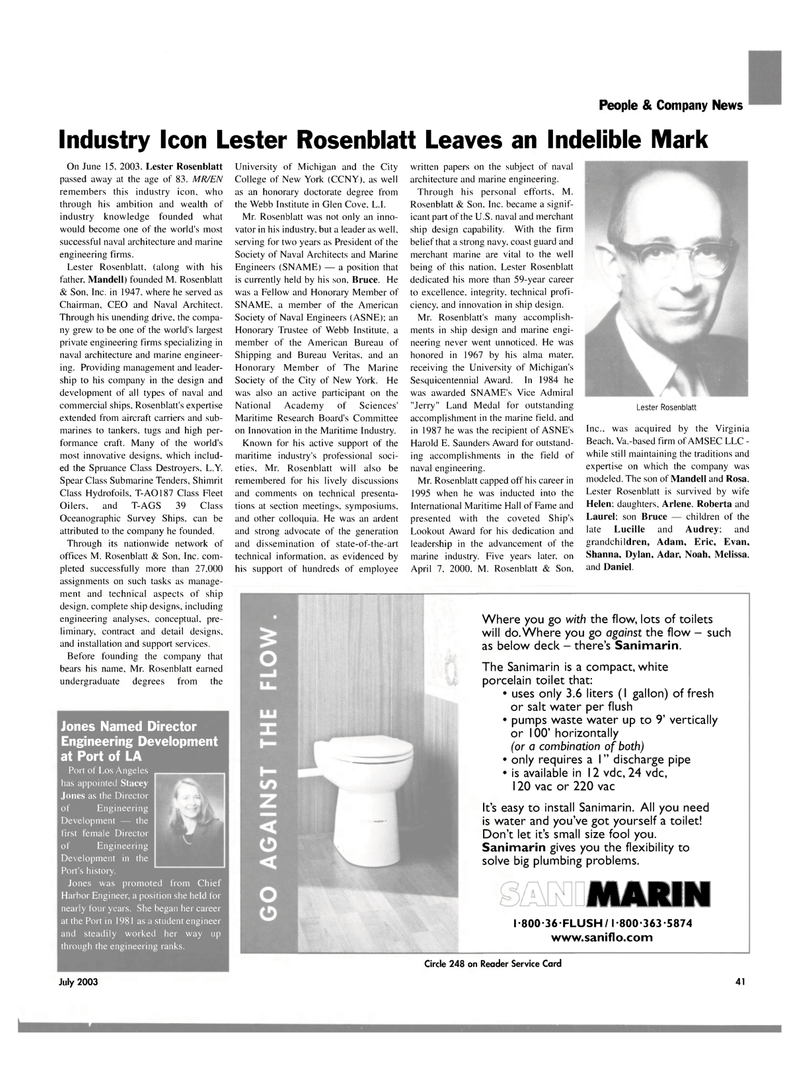 On June 15, 2003. Lester Rosenblatt passed away at the age of 83. MR/EN remembers this industry icon, who through his ambition and wealth of industry knowledge founded what would become one of the world's most successful naval architecture and marine engineering firms.

Lester Rosenblatt, (along with his father. Mandell) founded M. Rosenblatt & Son, Inc. in 1947. where he served as

Through his unending drive, the compa- ny grew to be one of the world's largest private engineering firms specializing in naval architecture and marine engineer- ing. Providing management and leader- ship to his company in the design and development of all types of naval and commercial ships. Rosenblatt's expertise extended from aircraft carriers and sub- marines to tankers, tugs and high per- formance craft. Many of the world's most innovative designs, which includ- ed the Spruance Class Destroyers, L.Y.

Oceanographic Survey Ships, can be attributed to the company he founded.

Before founding the company that bears his name, Mr. Rosenblatt earned undergraduate degrees from the

University of Michigan and the City

College of New York (CCNY), as well as an honorary doctorate degree from the Webb Institute in Glen Cove, L.I.

Mr. Rosenblatt was not only an inno- vator in his industry, but a leader as well, serving for two years as President of the

Society of Naval Architects and Marine

Engineers (SNAME) — a position that is currently held by his son, Bruce. He was a Fellow and Honorary Member of

SNAME, a member of the American

Society of Naval Engineers (ASNE); an

Honorary Trustee of Webb Institute, a member of the American Bureau of

Shipping and Bureau Veritas, and an

Honorary Member of The Marine

Society of the City of New York. He was also an active participant on the

Maritime Research Board's Committee on Innovation in the Maritime Industry.

Known for his active support of the maritime industry's professional soci- eties, Mr. Rosenblatt will also be remembered for his lively discussions and comments on technical presenta- tions at section meetings, symposiums, and other colloquia. He was an ardent and strong advocate of the generation and dissemination of state-of-the-art technical information, as evidenced by his support of hundreds of employee written papers on the subject of naval architecture and marine engineering.

Through his personal efforts, M.

Rosenblatt & Son, Inc. became a signif- icant part of the U.S. naval and merchant ship design capability. With the firm belief that a strong navy, coast guard and merchant marine are vital to the well being of this nation. Lester Rosenblatt dedicated his more than 59-year career to excellence, integrity, technical profi- ciency, and innovation in ship design.

Mr. Rosenblatt's many accomplish- ments in ship design and marine engi- neering never went unnoticed. He was honored in 1967 by his alma mater, receiving the University of Michigan's

Sesquicentennial Award. In 1984 he was awarded SNAME's Vice Admiral "Jerry" Land Medal for outstanding accomplishment in the marine field, and in 1987 he was the recipient of ASNE's

Mr. Rosenblatt capped off his career in 1995 when he was inducted into the

International Maritime Hall of Fame and presented with the coveted Ship's

Lookout Award for his dedication and leadership in the advancement of the marine industry. Five years later, on

Inc.. was acquired by the Virginia

Beach, Va.-based firm of AMSEC LLC - while still maintaining the traditions and expertise on which the company was modeled. The son of Mandell and Rosa.

Lester Rosenblatt is survived by wife

Where you go with the flow, lots of toilets will do.Where you go against the flow - such as below deck - there's Sanimarin.

The Sanimarin is a compact, white porcelain toilet that: • uses only 3.6 liters (I gallon) of fresh or salt water per flush • pumps waste water up to 9' vertically or 100' horizontally (or a combination of both) • only requires a I" discharge pipe • is available in 12 vdc, 24 vdc, 120 vac or 220 vac

It's easy to install Sanimarin. All you need is water and you've got yourself a toilet!

Sanimarin gives you the flexibility to solve big plumbing problems.

Engineering Development at Port of LA

Jones as the Director of Engineering

Jones was promoted from Chief

Harbor Engineer, a position she held for nearly four years. She began her career at the Port in 1981 as a student engineer and steadily worked her way up through the engineering ranks.