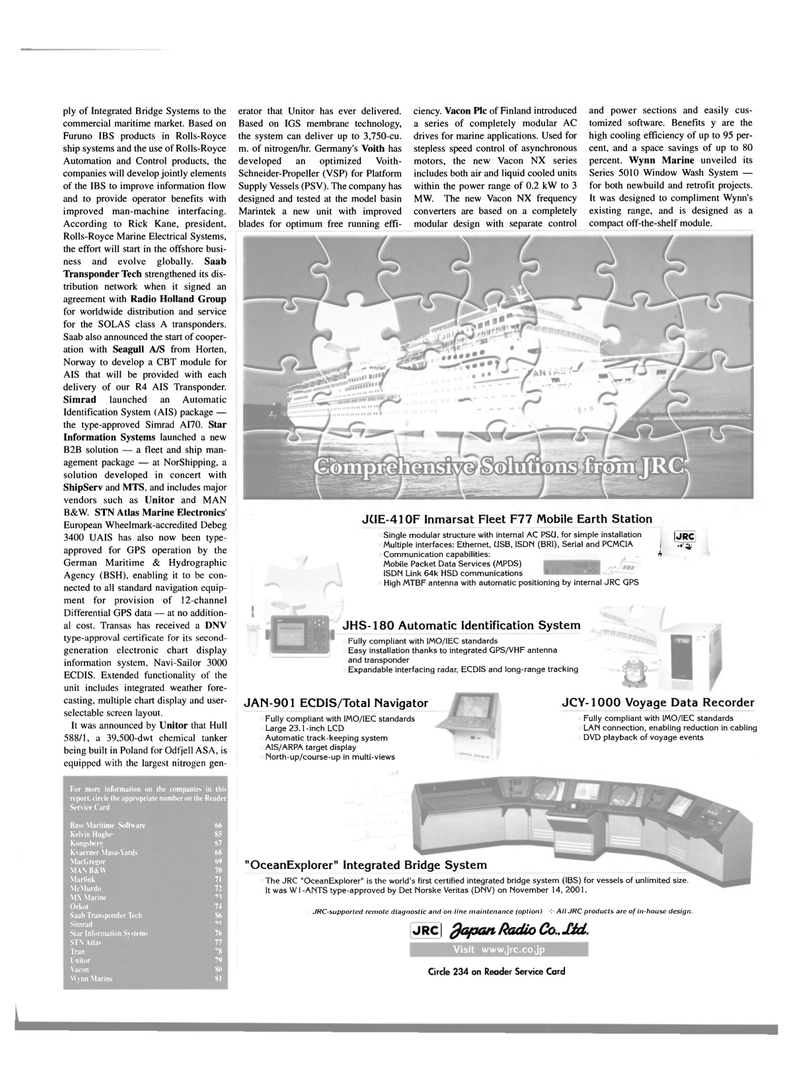 ply of Integrated Bridge Systems to the commercial maritime market. Based on

Automation and Control products, the companies will develop jointly elements of the IBS to improve information flow and to provide operator benefits with improved man-machine interfacing.

According to Rick Kane, president,

Transponder Tech strengthened its dis- tribution network when it signed an agreement with Radio Holland Group for worldwide distribution and service for the SOLAS class A transponders.

Saab also announced the start of cooper- ation with Seagull A/S from Horten,

Norway to develop a CBT module for

AIS that will be provided with each delivery of our R4 AIS Transponder.

B2B solution — a fleet and ship man- agement package — at NorShipping, a solution developed in concert with

ShipServ and MTS, and includes major vendors such as Unitor and MAN

Agency (BSH), enabling it to be con- nected to all standard navigation equip- ment for provision of 12-channel

It was announced by Unitor that Hull 588/1, a 39,500-dwt chemical tanker being built in Poland for Odfjell ASA, is equipped with the largest nitrogen gen- erator that Unitor has ever delivered.

Based on IGS membrane technology, the system can deliver up to 3,750-cu. m. of nitrogen/hr. Germany's Voith has developed an optimized Voith-

Supply Vessels (PSV). The company has designed and tested at the model basin

MW. The new Vacon NX frequency converters are based on a completely modular design with separate control and power sections and easily cus- tomized software. Benefits y are the high cooling efficiency of up to 95 per- cent, and a space savings of up to 80 percent. Wynn Marine unveiled its

Series 5010 Window Wash System — for both newbuild and retrofit projects.

It was designed to compliment Wynn's existing range, and is designed as a compact off-the-shelf module. [JRC I -''"it

Easy installation thanks to integrated GPS/VHF antenna and transponder

For more information on the companies in this report, circle the appropriate number on the Reader