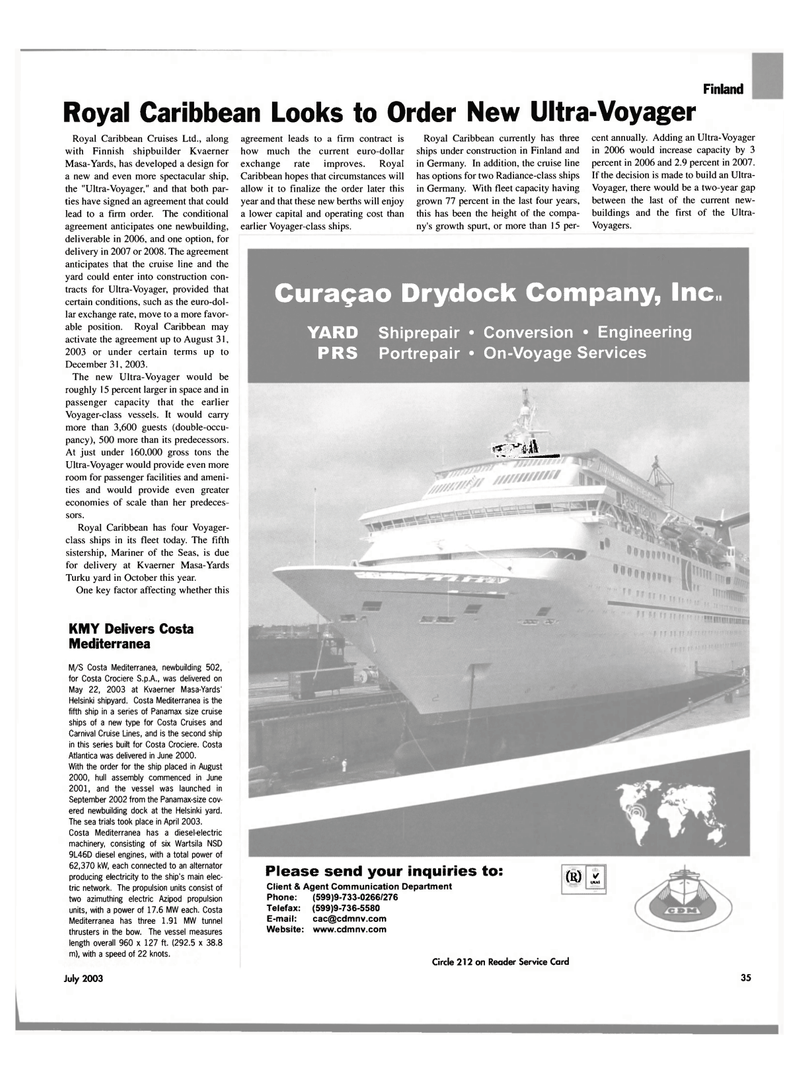 Masa-Yards, has developed a design for a new and even more spectacular ship, the "Ultra-Voyager," and that both par- ties have signed an agreement that could lead to a firm order. The conditional agreement anticipates one newbuilding, deliverable in 2006, and one option, for delivery in 2007 or 2008. The agreement anticipates that the cruise line and the yard could enter into construction con- tracts for Ultra-Voyager, provided that certain conditions, such as the euro-dol- lar exchange rate, move to a more favor- able position. Royal Caribbean may activate the agreement up to August 31, 2003 or under certain terms up to

Voyager-class vessels. It would carry more than 3,600 guests (double-occu- pancy), 500 more than its predecessors.

Royal Caribbean has four Voyager- class ships in its fleet today. The fifth sistership, Mariner of the Seas, is due for delivery at Kvaerner Masa-Yards

Turku yard in October this year.

One key factor affecting whether this

Helsinki shipyard. Costa Mediterranea is the fifth ship in a series of Panamax size cruise ships of a new type for Costa Cruises and

Carnival Cruise Lines, and is the second ship in this series built for Costa Crociere. Costa

Atlantica was delivered in June 2000.

With the order for the ship placed in August 2000, hull assembly commenced in June 2001, and the vessel was launched in

September 2002 from the Panamax-size cov- ered newbuilding dock at the Helsinki yard.

Costa Mediterranea has a diesel-electric machinery, consisting of six Wartsila NSD 9L46D diesel engines, with a total power of 62,370 kW, each connected to an alternator producing electricity to the ship's main elec- tric network. The propulsion units consist of two azimuthing electric Azipod propulsion units, with a power of 17.6 MW each. Costa

Mediterranea has three 1.91 MW tunnel thrusters in the bow. The vessel measures length overall 960 x 127 ft. (292.5 x 38.8 m), with a speed of 22 knots. agreement leads to a firm contract is how much the current euro-dollar exchange rate improves. Royal

Caribbean hopes that circumstances will allow it to finalize the order later this year and that these new berths will enjoy a lower capital and operating cost than earlier Voyager-class ships.

Royal Caribbean currently has three ships under construction in Finland and in Germany. In addition, the cruise line has options for two Radiance-class ships in Germany. With fleet capacity having grown 77 percent in the last four years, this has been the height of the compa- ny's growth spurt, or more than 15 per-

If the decision is made to build an Ultra-

Voyager, there would be a two-year gap between the last of the current new- buildings and the first of the Ultra-

Please send your inquiries to: