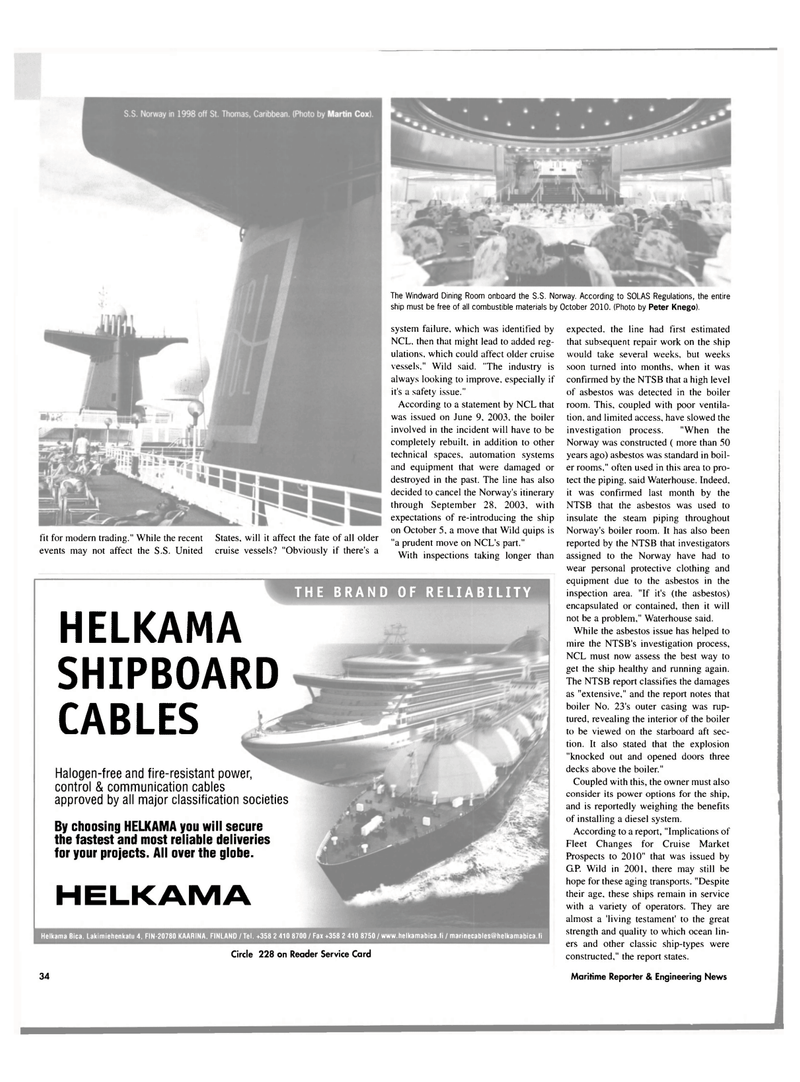 The Windward Dining Room onboard the S.S. Norway. According to SOLAS Regulations, the entire ship must be free of all combustible materials by October 2010. (Photo by Peter Knego). expected, the line had first estimated that subsequent repair work on the ship would take several weeks, but weeks soon turned into months, when it was confirmed by the NTSB that a high level of asbestos was detected in the boiler room. This, coupled with poor ventila- tion, and limited access, have slowed the investigation process. "When the

Norway was constructed ( more than 50 years ago) asbestos was standard in boil- er rooms," often used in this area to pro- tect the piping, said Waterhouse. Indeed, it was confirmed last month by the

Norway's boiler room. It has also been reported by the NTSB that investigators assigned to the Norway have had to wear personal protective clothing and equipment due to the asbestos in the inspection area. "If it's (the asbestos) encapsulated or contained, then it will not be a problem," Waterhouse said.

While the asbestos issue has helped to mire the NTSB's investigation process,

NCL must now assess the best way to get the ship healthy and running again.

The NTSB report classifies the damages as "extensive," and the report notes that boiler No. 23's outer casing was rup- tured, revealing the interior of the boiler to be viewed on the starboard aft sec- tion. It also stated that the explosion "knocked out and opened doors three decks above the boiler."

Coupled with this, the owner must also consider its power options for the ship, and is reportedly weighing the benefits of installing a diesel system.

According to a report, "Implications of

Prospects to 2010" that was issued by

G.P. Wild in 2001, there may still be hope for these aging transports. "Despite their age. these ships remain in service with a variety of operators. They are almost a 'living testament' to the great strength and quality to which ocean lin- ers and other classic ship-types were constructed," the report states. Circle 228 on Reader Service Card fit for modern trading." While the recent States, will it affect the fate of all older events may not affect the S.S. United cruise vessels? "Obviously if there's a system failure, which was identified by

NCL. then that might lead to added reg- ulations, which could affect older cruise vessels," Wild said. "The industry is always looking to improve, especially if it's a safety issue."

According to a statement by NCL that was issued on June 9, 2003, the boiler involved in the incident will have to be completely rebuilt, in addition to other technical spaces, automation systems and equipment that were damaged or destroyed in the past. The line has also decided to cancel the Norway's itinerary through September 28, 2003, with expectations of re-introducing the ship on October 5, a move that Wild quips is "a prudent move on NCL's part."

With inspections taking longer than

THE BRAND OF RELIABILITY

By choosing HELKAMA you will secure the fastest and most reliable deliveries for your projects. All over the globe.