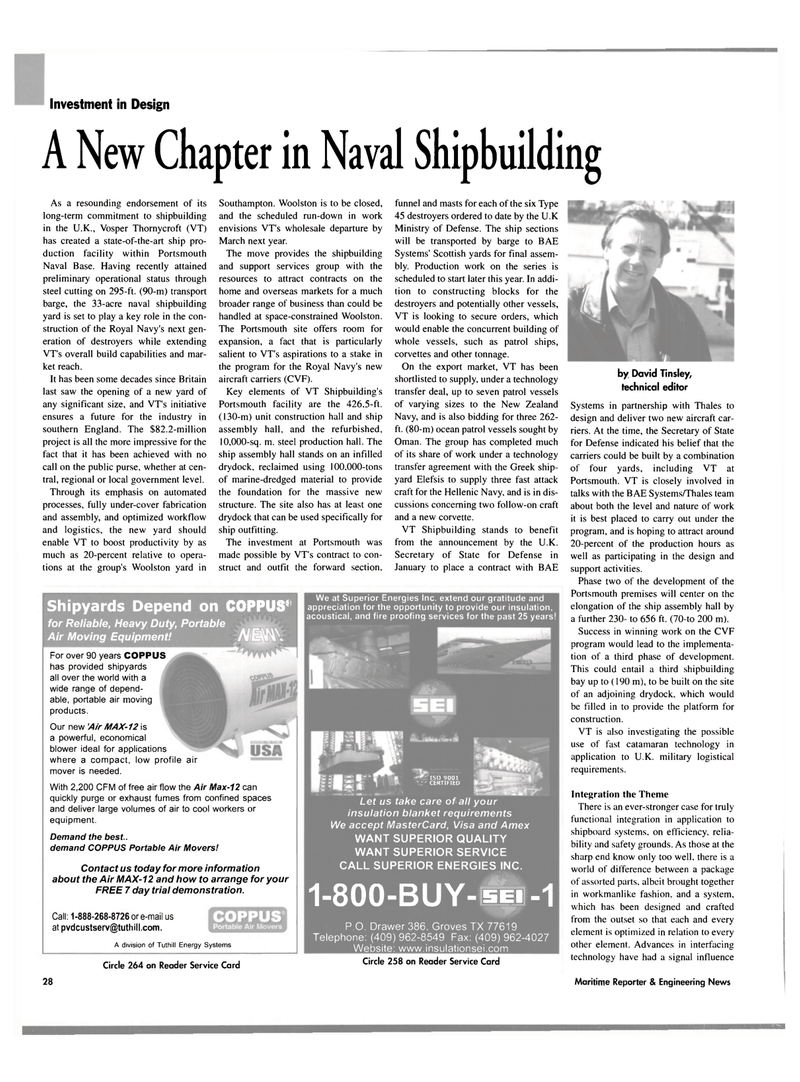 A New Chapter in Naval Shipbuilding

As a resounding endorsement of its long-term commitment to shipbuilding in the U.K., Vosper Thornycroft (VT) has created a state-of-the-art ship pro- duction facility within Portsmouth

Naval Base. Having recently attained preliminary operational status through steel cutting on 295-ft. (90-m) transport barge, the 33-acre naval shipbuilding yard is set to play a key role in the con- struction of the Royal Navy's next gen- eration of destroyers while extending

It has been some decades since Britain last saw the opening of a new yard of any significant size, and VT's initiative ensures a future for the industry in southern England. The $82.2-million project is all the more impressive for the fact that it has been achieved with no call on the public purse, whether at cen- tral, regional or local government level.

Through its emphasis on automated processes, fully under-cover fabrication and assembly, and optimized workflow and logistics, the new yard should enable VT to boost productivity by as much as 20-percent relative to opera- tions at the group's Woolston yard in

Southampton. Woolston is to be closed, and the scheduled run-down in work envisions VT's wholesale departure by

The move provides the shipbuilding and support services group with the resources to attract contracts on the home and overseas markets for a much broader range of business than could be handled at space-constrained Woolston.

The Portsmouth site offers room for expansion, a fact that is particularly salient to VT's aspirations to a stake in the program for the Royal Navy's new aircraft carriers (CVF).

Portsmouth facility are the 426,5-ft. (130-m) unit construction hall and ship assembly hall, and the refurbished, 10,000-sq. m. steel production hall. The ship assembly hall stands on an infilled drydock, reclaimed using 100,000-tons of marine-dredged material to provide the foundation for the massive new structure. The site also has at least one drydock that can be used specifically for ship outfitting.

The investment at Portsmouth was made possible by VT's contract to con- struct and outfit the forward section. funnel and masts for each of the six Type 45 destroyers ordered to date by the U.K

Ministry of Defense. The ship sections will be transported by barge to BAE

Systems' Scottish yards for final assem- bly. Production work on the series is scheduled to start later this year. In addi- tion to constructing blocks for the destroyers and potentially other vessels,

VT is looking to secure orders, which would enable the concurrent building of whole vessels, such as patrol ships, corvettes and other tonnage.

On the export market, VT has been shortlisted to supply, under a technology transfer deal, up to seven patrol vessels of varying sizes to the New Zealand

Oman. The group has completed much of its share of work under a technology transfer agreement with the Greek ship- yard Elefsis to supply three fast attack craft for the Hellenic Navy, and is in dis- cussions concerning two follow-on craft and a new corvette.

VT Shipbuilding stands to benefit from the announcement by the U.K.

Secretary of State for Defense in

January to place a contract with BAE

Shipyards Depend on COPPUS* for Reliable, Heavy Duty, Portable

We at Superior Energies Inc. extend our gratitude and appreciation for the opportunity to provide our insulation, acoustical, and fire proofing services for the past 25 years!

For over 90 years COPPUS has provided shipyards all over the world with a wide range of depend- able, portable air moving products.

Our new Air MAX-12 is a powerful, economical blower ideal for applications where a compact, low profile air mover is needed.

With 2,200 CFM of free air flow the Air Max-12 can quickly purge or exhaust fumes from confined spaces and deliver large volumes of air to cool workers or equipment.

A division of Tuthill Energy Systems

Let us take care of all your insulation blanket requirements

We accept MasterCard, Visa and Amex

Systems in partnership with Thales to design and deliver two new aircraft car- riers. At the time, the Secretary of State for Defense indicated his belief that the carriers could be built by a combination of four yards, including VT at

Portsmouth. VT is closely involved in talks with the BAE Systems/Thales team about both the level and nature of work it is best placed to carry out under the program, and is hoping to attract around 20-percent of the production hours as well as participating in the design and support activities.

Phase two of the development of the

Success in winning work on the CVF program would lead to the implementa- tion of a third phase of development.

This could entail a third shipbuilding bay up to (190 m), to be built on the site of an adjoining drydock, which would be filled in to provide the platform for construction.

VT is also investigating the possible use of fast catamaran technology in application to U.K. military logistical requirements.

There is an ever-stronger case for truly functional integration in application to shipboard systems, on efficiency, relia- bility and safety grounds. As those at the sharp end know only too well, there is a world of difference between a package of assorted parts, albeit brought together in workmanlike fashion, and a system, which has been designed and crafted from the outset so that each and every element is optimized in relation to every other element. Advances in interfacing technology have had a signal influence 28 Maritime Reporter & Engineering News