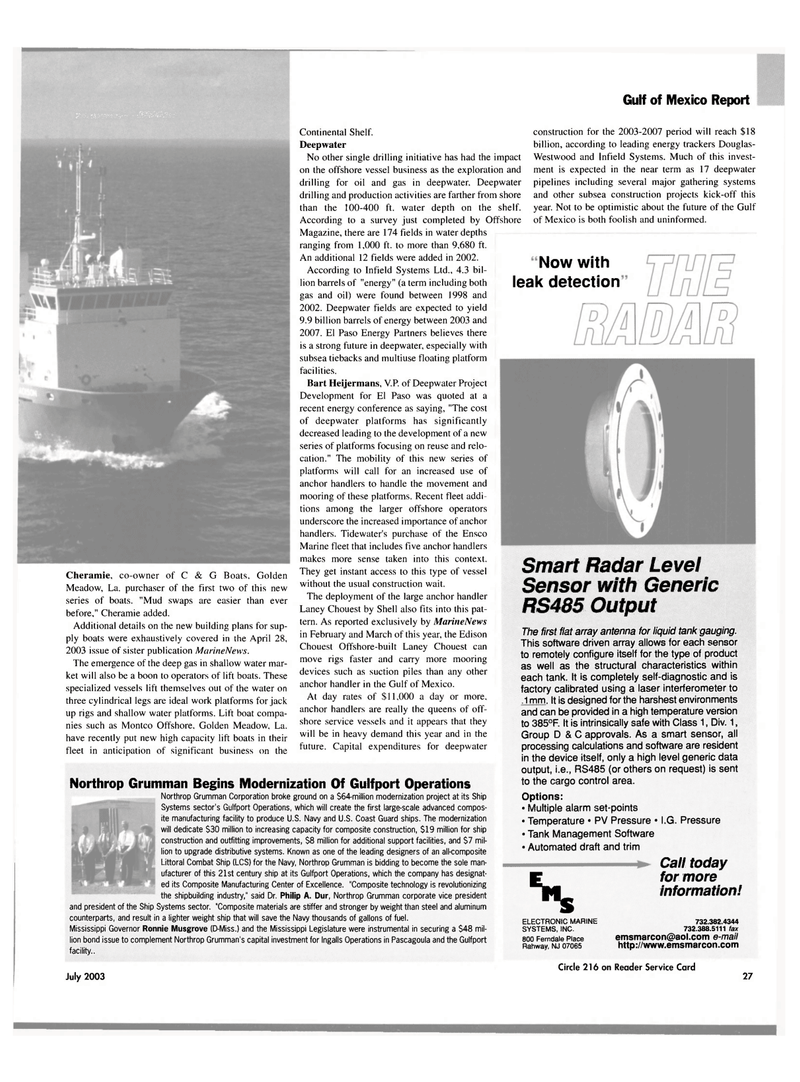 Meadow, La. purchaser of the first two of this new series of boats. "Mud swaps are easier than ever before," Cheramie added.

Additional details on the new building plans for sup- ply boats were exhaustively covered in the April 28, 2003 issue of sister publication MarineNews.

The emergence of the deep gas in shallow water mar- ket will also be a boon to operators of lift boats. These specialized vessels lift themselves out of the water on three cylindrical legs are ideal work platforms for jack up rigs and shallow water platforms. Lift boat compa- nies such as Montco Offshore, Golden Meadow, La. have recently put new high capacity lift boats in their fleet in anticipation of significant business on the

No other single drilling initiative has had the impact on the offshore vessel business as the exploration and drilling for oil and gas in deepwater. Deepwater drilling and production activities are farther from shore than the 100-400 ft. water depth on the shelf.

According to a survey just completed by Offshore

According to Infield Systems Ltd., 4.3 bil- lion barrels of "energy" (a term including both gas and oil) were found between 1998 and 2002. Deepwater fields are expected to yield 9.9 billion barrels of energy between 2003 and 2007. El Paso Energy Partners believes there is a strong future in deepwater, especially with subsea tiebacks and multiuse floating platform facilities.

Development for El Paso was quoted at a recent energy conference as saying, "The cost of deepwater platforms has significantly decreased leading to the development of a new series of platforms focusing on reuse and relo- cation." The mobility of this new series of platforms will call for an increased use of anchor handlers to handle the movement and mooring of these platforms. Recent fleet addi- tions among the larger offshore operators underscore the increased importance of anchor handlers. Tidewater's purchase of the Ensco

They get instant access to this type of vessel without the usual construction wait.

The deployment of the large anchor handler

Laney Chouest by Shell also fits into this pat- tern. As reported exclusively by MarineNews in February and March of this year, the Edison

Chouest Offshore-built Laney Chouest can move rigs faster and carry more mooring devices such as suction piles than any other anchor handler in the Gulf of Mexico.

At day rates of $11,000 a day or more, anchor handlers are really the queens of off- shore service vessels and it appears that they will be in heavy demand this year and in the future. Capital expenditures for deepwater

Systems sector's Gulfport Operations, which will create the first large-scale advanced compos- ite manufacturing facility to produce U.S. Navy and U.S. Coast Guard ships. The modernization will dedicate $30 million to increasing capacity for composite construction, $19 million for ship construction and outfitting improvements, $8 million for additional support facilities, and $7 mil- lion to upgrade distributive systems. Known as one of the leading designers of an all-composite

Littoral Combat Ship (LCS) for the Navy, Northrop Grumman is bidding to become the sole man- ufacturer of this 21st century ship at its Gulfport Operations, which the company has designat- ed its Composite Manufacturing Center of Excellence. "Composite technology is revolutionizing the shipbuilding industry," said Dr. Philip A. Dur, Northrop Grumman corporate vice president and president of the Ship Systems sector. "Composite materials are stiffer and stronger by weight than steel and aluminum counterparts, and result in a lighter weight ship that will save the Navy thousands of gallons of fuel.

Mississippi Governor Ronnie Musgrove (D-Miss.) and the Mississippi Legislature were instrumental in securing a $48 mil- lion bond issue to complement Northrop Grumman's capital investment for Ingalls Operations in Pascagoula and the Gulfport facility.. construction for the 2003-2007 period will reach $18 billion, according to leading energy trackers Douglas-

Westwood and Infield Systems. Much of this invest- ment is expected in the near term as 17 deepwater pipelines including several major gathering systems and other subsea construction projects kick-off this year. Not to be optimistic about the future of the Gulf of Mexico is both foolish and uninformed.

This software driven array allows for each sensor to remotely configure itself for the type of product as well as the structural characteristics within each tank. It is completely self-diagnostic and is factory calibrated using a laser interferometer to ,1mm. It is designed for the harshest environments and can be provided in a high temperature version to 385°F. It is intrinsically safe with Class 1, Div. 1,

Group D & C approvals. As a smart sensor, all processing calculations and software are resident in the device itself, only a high level generic data output, i.e., RS485 (or others on request) is sent to the cargo control area.