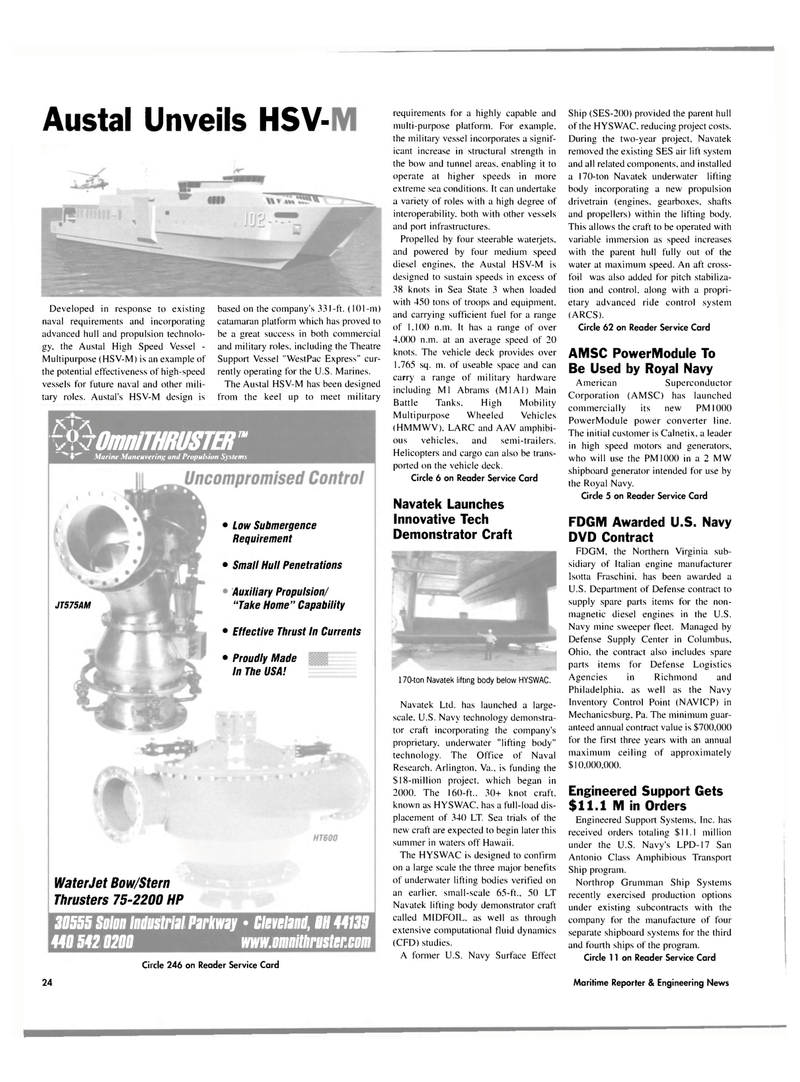 Multipurpose (HSV-M) is an example of the potential effectiveness of high-speed vessels for future naval and other mili- tary roles. Austal's HSV-M design is

NA based on the company's 331-ft. (101-m) catamaran platform which has proved to be a great success in both commercial and military roles, including the Theatre

Thrusters 75-2200 HP 30555 Solon Industrial Parkway • Cleveland, OH 44139 440 5420200 www.omnithrusler.com requirements for a highly capable and multi-purpose platform. For example, the military vessel incorporates a signif- icant increase in structural strength in the bow and tunnel areas, enabling it to operate at higher speeds in more extreme sea conditions. It can undertake a variety of roles with a high degree of interoperability, both with other vessels and port infrastructures.

Propelled by four steerable waterjets, and powered by four medium speed diesel engines, the Austal HSV-M is designed to sustain speeds in excess of 38 knots in Sea State 3 when loaded with 450 tons of troops and equipment, and carrying sufficient fuel for a range of 1.100 n.m. It has a range of over 4.000 n.m. at an average speed of 20 knots. The vehicle deck provides over 1.765 sq. m. of useable space and can carry a range of military hardware including Ml Abrams (M1A1) Main

Helicopters and cargo can also be trans- ported on the vehicle deck.

Research. Arlington. Va., is funding the $18-million project, which began in 2000. The 160-ft.. 30+ knot craft, known as HYSWAC. has a full-load dis- placement of 340 LT. Sea trials of the new craft are expected to begin later this summer in waters off Hawaii.

The HYSWAC is designed to confirm on a large scale the three major benefits of underwater lifting bodies verified on an earlier, small-scale 65-ft., 50 LT

This allows the craft to be operated with variable immersion as speed increases with the parent hull fully out of the water at maximum speed. An aft cross- foil was also added for pitch stabiliza- tion and control, along with a propri- etary advanced ride control system (ARCS).

Be Used by Royal Navy

The initial customer is Calnetix, a leader in high speed motors and generators, who will use the PM1000 in a 2 MW shipboard generator intended for use by the Royal Navy.

Isotta Fraschini, has been awarded a

U.S. Department of Defense contract to supply spare parts items for the non- magnetic diesel engines in the U.S.

Navy mine sweeper fleet. Managed by

Agencies in Richmond and

Philadelphia, as well as the Navy

Mechanicsburg, Pa. The minimum guar- anteed annual contract value is $700,000 for the first three years with an annual maximum ceiling of approximately $10,000,000.

Engineered Support Gets $11.1 M in Orders

Northrop Grumman Ship Systems recently exercised production options under existing subcontracts with the company for the manufacture of four separate shipboard systems for the third and fourth ships of the program.