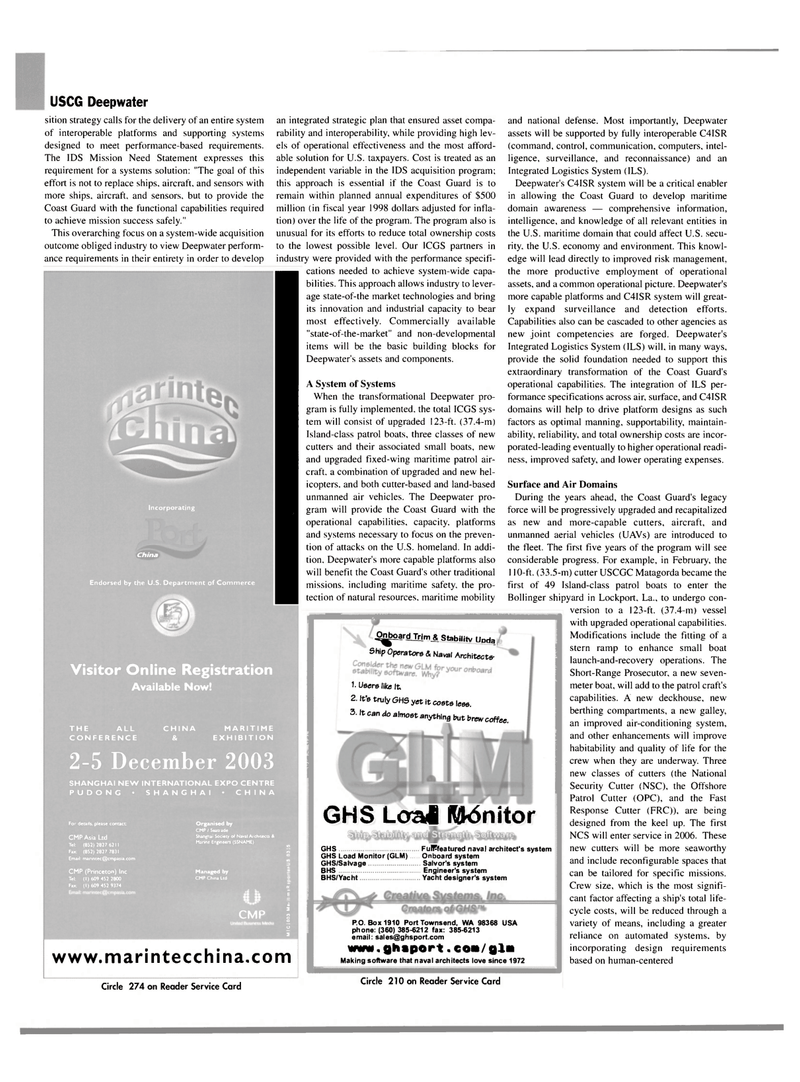 USCG Deepwater sition strategy calls for the delivery of an entire system of interoperable platforms and supporting systems designed to meet performance-based requirements.

Endorsed by the U.S. Department of Commerce

THE ALL CHINA MARITIME

CMP an integrated strategic plan that ensured asset compa- rability and interoperability, while providing high lev- els of operational effectiveness and the most afford- able solution for U.S. taxpayers. Cost is treated as an independent variable in the IDS acquisition program; this approach is essential if the Coast Guard is to remain within planned annual expenditures of $500 million (in fiscal year 1998 dollars adjusted for infla- tion) over the life of the program. The program also is unusual for its efforts to reduce total ownership costs to the lowest possible level. Our 1CGS partners in industry were provided with the performance specifi-I cations needed to achieve system-wide capa- bilities. This approach allows industry to lever- age state-of-the market technologies and bring its innovation and industrial capacity to bear most effectively. Commercially available "state-of-the-market" and non-developmental items will be the basic building blocks for

A System of Systems

When the transformational Deepwater pro- gram is fully implemented, the total ICGS sys- tem will consist of upgraded 123-ft. (37.4-m)

O 2 and national defense. Most importantly, Deepwater assets will be supported by fully interoperable C4ISR (command, control, communication, computers, intel- ligence, surveillance, and reconnaissance) and an

Deepwater's C4ISR system will be a critical enabler in allowing the Coast Guard to develop maritime domain awareness — comprehensive information, intelligence, and knowledge of all relevant entities in the U.S. maritime domain that could affect U.S. secu- rity. the U.S. economy and environment. This knowl- edge will lead directly to improved risk management, the more productive employment of operational assets, and a common operational picture. Deepwater's more capable platforms and C4ISR system will great- ly expand surveillance and detection efforts.

Capabilities also can be cascaded to other agencies as new joint competencies are forged. Deepwater's

Integrated Logistics System (ILS) will, in many ways, provide the solid foundation needed to support this extraordinary transformation of the Coast Guard's operational capabilities. The integration of ILS per- formance specifications across air, surface, and C4ISR domains will help to drive platform designs as such factors as optimal manning, supportability, maintain- ability, reliability, and total ownership costs are incor- porated-leading eventually to higher operational readi- ness, improved safety, and lower operating expenses.

During the years ahead, the Coast Guard's legacy force will be progressively upgraded and recapitalized as new and more-capable cutters, aircraft, and unmanned aerial vehicles (UAVs) are introduced to the fleet. The first five years of the program will see considerable progress. For example, in February, the 110-ft. (33.5-m) cutter USCGC Matagorda became the first of 49 Island-class patrol boats to enter the

Modifications include the fitting of a stern ramp to enhance small boat launch-and-recovery operations. The

Short-Range Prosecutor, a new seven- meter boat, will add to the patrol craft's capabilities. A new deckhouse, new berthing compartments, a new galley, an improved air-conditioning system, and other enhancements will improve habitability and quality of life for the crew when they are underway. Three new classes of cutters (the National

Patrol Cutter (OPC), and the Fast

Response Cutter (FRC)), are being designed from the keel up. The first

NCS will enter service in 2006. These new cutters will be more seaworthy and include reconfigurable spaces that can be tailored for specific missions.

Crew size, which is the most signifi- cant factor affecting a ship's total life- cycle costs, will be reduced through a variety of means, including a greater reliance on automated systems, by incorporating design requirements based on human-centered •^arOimASfabintyJ^

Ship Operators & Naval Architects- 1. Users like It 2. It's truly GHS yet it costs less. 3. It can do almost anything but brew coffee.