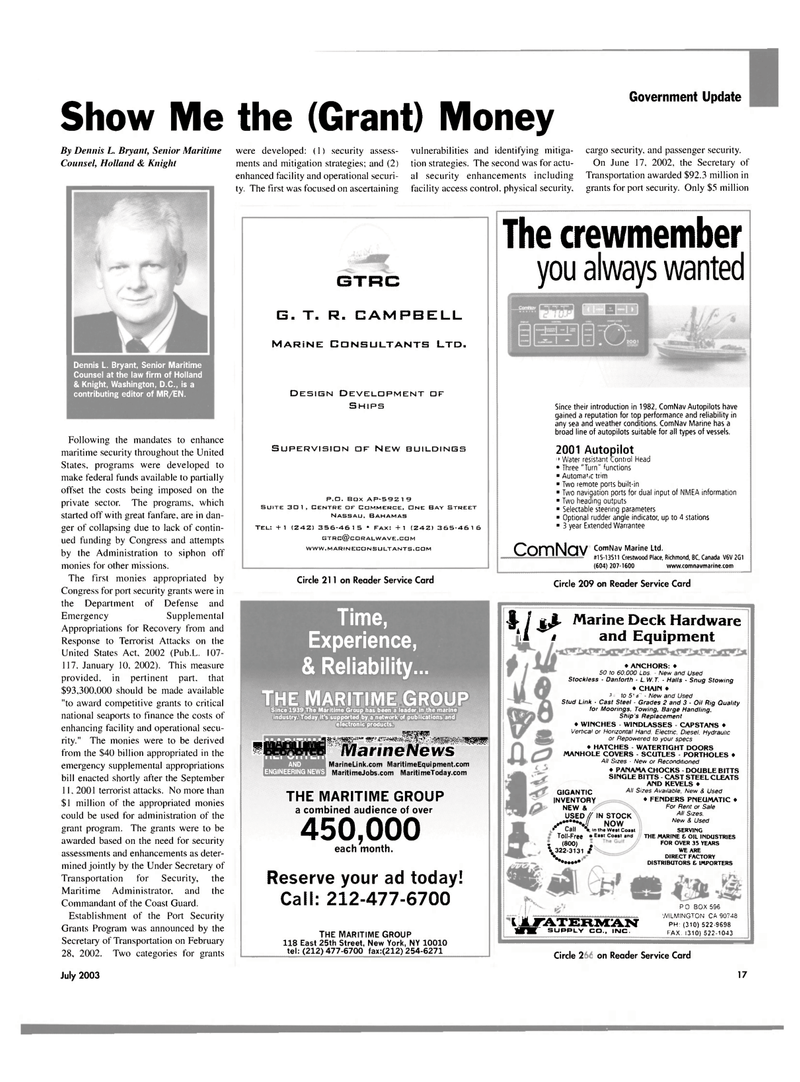 Show Me the (Grant) Money

Transportation awarded $92.3 million in grants for port security. Only $5 million

Counsel at the law firm of Holland & Knight, Washington, D.C., is a contributing editor of MR/EN.

Following the mandates to enhance maritime security throughout the United

States, programs were developed to make federal funds available to partially offset the costs being imposed on the private sector. The programs, which started off with great fanfare, are in dan- ger of collapsing due to lack of contin- ued funding by Congress and attempts by the Administration to siphon off monies for other missions.

The first monies appropriated by

Appropriations for Recovery from and

Response to Terrorist Attacks on the

United States Act, 2002 (Pub.L. 107- 117, January 10, 2002). This measure provided, in pertinent part, that $93,300,000 should be made available "to award competitive grants to critical national seaports to finance the costs of enhancing facility and operational secu- rity." The monies were to be derived from the $40 billion appropriated in the emergency supplemental appropriations bill enacted shortly after the September 11. 2001 terrorist attacks. No more than $1 million of the appropriated monies could be used for administration of the grant program. The grants were to be awarded based on the need for security assessments and enhancements as deter- mined jointly by the Under Secretary of

Transportation for Security, the

Maritime Administrator, and the

Commandant of the Coast Guard.

Establishment of the Port Security

Grants Program was announced by the

Secretary of Transportation on February 28, 2002. Two categories for grants

The crewmember you always wanted

Since 1939 The Maritime Group has been a leader in the marine industry. Today it's supported by a network of publications and electronic products.

THE MARITIME GROUP a combined audience of over 450,000 each month.

For Rent or Sale