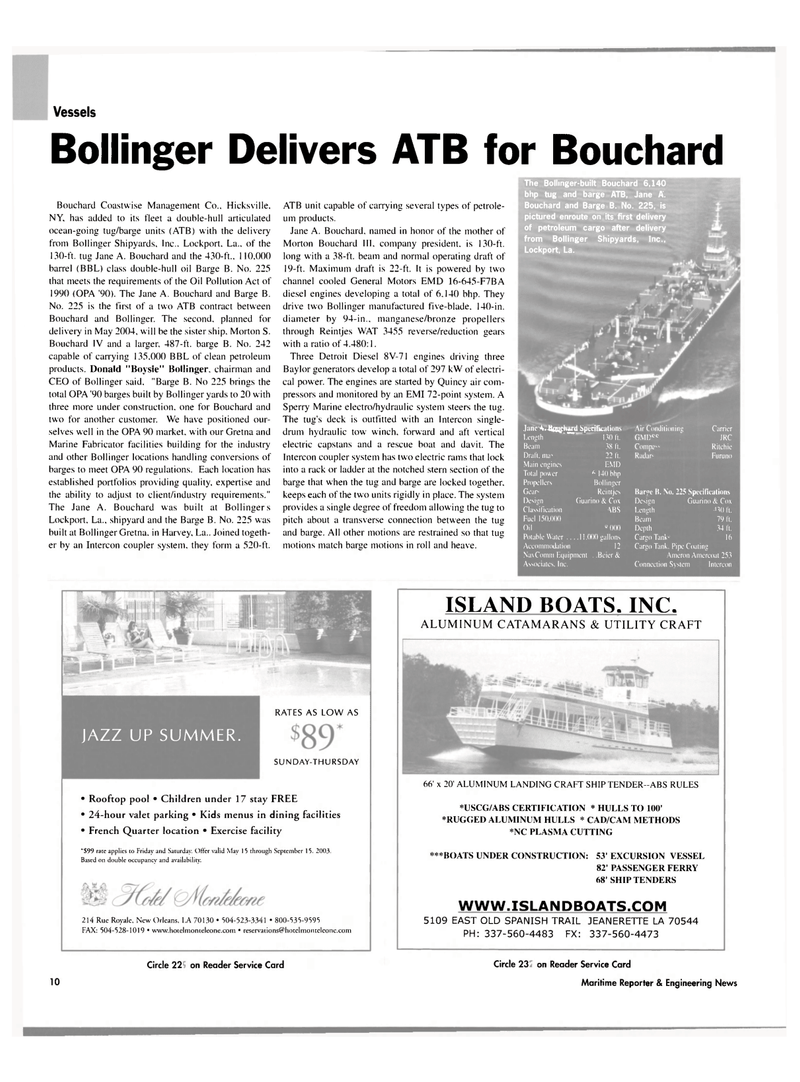 No. 225 is the first of a two ATB contract between

Bouchard and Bollinger. The second, planned for delivery in May 2004, will be the sister ship. Morton S.

Bouchard IV and a larger, 487-ft. barge B. No. 242 capable of carrying 135,000 BBL of clean petroleum products. Donald "Boysie" Bollinger, chairman and

CEO of Bollinger said. "Barge B. No 225 brings the total OPA '90 barges built by Bollinger yards to 20 with three more under construction, one for Bouchard and two for another customer. We have positioned our- selves well in the OPA 90 market, with our Gretna and

Marine Fabricator facilities building for the industry and other Bollinger locations handling conversions of barges to meet OPA 90 regulations. Each location has established portfolios providing quality, expertise and the ability to adjust to client/industry requirements."

The Jane A. Bouchard was built at Bollinger s

Lockport. La., shipyard and the Barge B. No. 225 was built at Bollinger Gretna, in Harvey, La.. Joined togeth- er by an Intercon coupler system, they form a 520-ft.

Jane A. Bouchard, named in honor of the mother of

Morton Bouchard III, company president, is 130-ft. long with a 38-ft. beam and normal operating draft of 19-ft. Maximum draft is 22-ft. It is powered by two channel cooled General Motors EMD 16-645-F7BA diesel engines developing a total of 6.140 bhp. They drive two Bollinger manufactured five-blade, 140-in. diameter by 94-in.. manganese/bronze propellers through Reintjes WAT 3455 reverse/reduction gears with a ratio of 4.480:1.

Baylor generators develop a total of 297 kW of electri- cal power. The engines are started by Quincy air com- pressors and monitored by an EMI 72-point system. A

The tug's deck is outfitted with an Intercon single- drum hydraulic tow winch, forward and aft vertical electric capstans and a rescue boat and davit. The

Intercon coupler system has two electric rams that lock into a rack or ladder at the notched stern section of the barge that when the tug and barge are locked together, keeps each of the two units rigidly in place. The system provides a single degree of freedom allowing the tug to pitch about a transverse connection between the tug and barge. All other motions are restrained so that tug motions match barge motions in roll and heave.

The Bollinger-built Bouchard 6,140 bhp tug and barge ATB, Jane A.

Bouchard and Barge B. No. 225, is pictured enroute on its first delivery of petroleum cargo after delivery from Bollinger Shipyards, Inc.,

RATES AS LOW AS